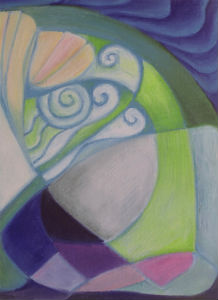 I remembered in 2000 that I had been involved with a Group Show in the Dublin Writers’ Museum, 1995, not just of painters, but for both artists of paint and of writing. A collaboration between a writer and an artist. The show was called the Reddest Stolen Cherries. I remembered also that my painting with the poem written by my collaborating poet Gwyn Parry had been the only one to sell, and that our combined work had gone to live in Paris.

Because of this remembrance, I rang and called into the Dublin Writers’ Museum to ask could I put on an exhibition. Yes of course. The only requirement was that the art was to include the written word, and my own insurance. Other than that, the room was free, and free to use, and so I booked it.

I titled this art exhibition of mine Visual Voice, as I was a writer and an artist, and this exhibition was to combine them both in one show. Two more shows were to follow using this term Visual Voice,as a …. have word written somewhere to explain that :)  Later !

The massive doll’s house in the room was relocated during the exhibition, thankfully, and so gave me an opportunity to do something creative..with pebbles in the centre of room.

This show was opened by John Gormley.

Visual Voice ran for a month.