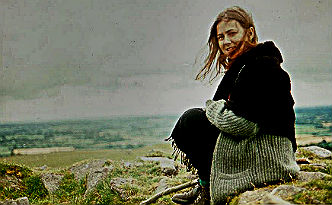 I was sat looking at the RTE 1 6.01 news on a very small black and white television in a small box of a house in Harold’s Cross Cottages. The television briefly on loan from a sister, sat on the floor.

The news reader was announcing in delighted tones that Ireland was to receive a loan of 9 million pounds (or was that 9 billion pounds? I am working on memory here). How could the newsreader be delighted? To me, it was obvious, this was the OLDEST TRICK IN THE BOOK – 9 million / billion = beads and mirrors to ensnare us. Our sovereignty under threat. My own sovereignty was under threat too. I was so upset by this announcement and what it truly meant.

( I have listened to the rest of this tape and there seems to be a chipmunk quality to my vocals later, so this recording of Fool for a Penny is not exactly how I sounded back then. The tape has lost its bass )

There were other signposts over the next few months / year. From memory. I had had a conversation with someone down in Kerry. They told me of the old people’s houses being bought up by certain Europeans at cheap prices. The buyers in question allowing the old person to live on in the house until they died, and the buyer then taking over the house once the old person had passed away. We were both in agreement there was something intrinsically wrong with this.

1996 Ireland was changing, the first murmurings of the beginning of motorways and widening of roads, the cutting off of winding curves, left over to the side of straightened roads like ox bow lakes. The landscape and the journey beginning to change forever.

Around this time, I had seen condescending posters in Dublin bus shelters courtesy of the European Commission announcing Grow more flowers. What? The following year, I had been to visit the school in Bull Alley, Dublin, a few times. On the walls of this school where small blue stickers with the European white stars and I love my country Europe written on them. What? Propaganda at a young age. There were also cartoon posters in glass frames with a friendly looking dragon / people sweeping out the boarders of all the countries.. What?

And as for the feeling I had at the time, I was passionate, and disgusted. Something was up and I didn’t like it one bit. Did people realise? I could not see or know the full picture, how could I, but there was something very wrong being set up. I was passionate to get this song heard, I sang it at songwriters’ nights. I had no way of getting is aired Nationally. I always introduced it as my Anti-EU song (not anti-European countries).

I regretted that I could not get this subtle song out there and heard, for the sentiment alone. I was reminded of this for the last time at the march against the IMF in Dublin. For me, this song ran out of date years ago. Its warning now useless. Would it have made a difference? I will never know and who am I to even think that. If the river is to run a course it will do so. Or maybe not? Some have been holding the line. I share this song now with my apologies for being 18 years too late. 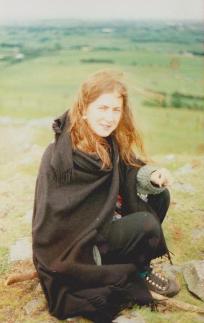 “When Oisin returns with gold in his hands” – was still way to the future in the 2000’s when the money god blinded all. It had a price. There was always going to be a price. I saw it in 1996. No doubt I was not alone in that feeling at the time. A man from Co. Mayo visiting Inishturk Island like me, in 1996, nodded his head to me and said a few words of acknowledgement after I sang this new song of mine to him in the bar there. He knew. He understood.

‘She’ in the song is the Guardian of this land, but also me, travelling the small roads and walking the coastlines to the west. The lyrics ‘White flags‘ and ‘Voices high’ I couldn’t quite square and still can’t. White flags being surrender / giving up / accepting (must be the fluoridated water, the prozac, x-factor..); could I have put Red flags in instead of White flags? I thought about it, tried it – however, there was no revolution going on; Voices high – I didn’t hear any. Today, people are getting louder. Often I would sing just “and she’s lifting up white flags, lifting up white flags”.

Now in 2014 we all know the story. The Betrayal continues.

Please note Strangers in our land does not refer to ordinary folk who happen to be genuine immigrants to Ireland, it refers to strange systems, corporate entities, the selfish ones, and those individuals who think its ok to buy property, land from under ordinary folks. You know the story. Or Strangers to our Land – loss of ourselves, our inner compass, our sovereignty, our rights.

For those that may not know – Oisin refers to Oisin of the legend Tír na nÓg. We are all Oisin.

I have written alot here on what is essentially a very short song. I write all this as somehow to honour the then that was then, and how I felt, and what I would have liked to have shared publicly back then too.

( I have listened to the rest of this tape and there seems to be a chipmunk quality to my vocals later, so this recording of Fool for a Penny is not exactly how I sounded back then. The tape has lost its bass )