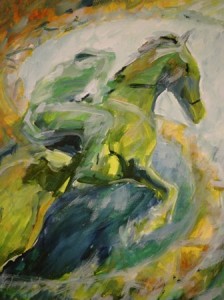 I was going to say ‘oh when was that’, but I have it noted – 1994. I am not even sure the art exhibition was called The Spiral Turns. There was a solar eclipse on the evening of the opening, 10th May 1994. Memory is dim. I just googled it to find out when. ‘Course there was no googling to find out anything then, no mobile phones (except a few bricks held by the few), no digital cameras, and no internet, and no youtube.

The year before I had lived in Galway for a number of months. I was back living in Dublin when I organised this my first Solo Art Exhibition.

It was held in the lovely Nimmo’s Restaurant by the Spanish Arch in Galway. I had had the paintings framed by Pete Kennely (sp?), Outherard ( will have to look up old file for address), who did and does a fantastic job.

I had done art in Senior School, but went on to study and work in Design. No ‘art’ art until I faced a blank piece of paper in 1992 and decided to try and unlearn all my design training, the structure, straight lines, t-square, set square, that ‘discipline’.

The image above The Spiral Turns is that first blank page faced, and the old kerb stone of Knowth was appropriate. And on it went through a series. From nothing to alot.

Many years later I can say that the design training I had done did / does benefit my art. It is a foundation. You never lose anything,..ideally. And now I have run out of word to explain it all. This will do for now.